Machining in Mexico, with Rogério Mezadri–EP 167 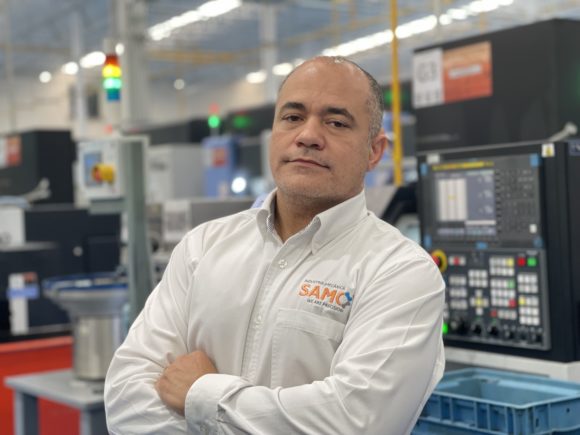 Our guest on the podcast today is Rogério Mezadri, Director of SAMOT Mexico, a 200-employee automotive machining company in Guanajuato, Mexico.

Rogério and I discussed the challenges running a machining company in Mexico. We talked about Mexican manufacturers upgrading technology. We also talked about the difficulty to find enough skilled manufacturing workers in Mexico. Yes, they have that problem too.

Scroll down to read more and listen to the podcast. Or listen on your phone with Google Podcasts, Apple Podcasts, Spotify, or your favorite app.
You can also view the podcast in video form on our YouTube Channel.

SAMOT Industria Mecanica, a large automotive supplier based in Brazil, opened its plant in Mexico in 2009.

Rogério worked at SAMOT’s São Paolo, Brazil, headquarters for many years, following in the footsteps of his father who also worked there. In 2014, he came on to lead the company’s Guanajuato, Mexico, plant.

The state of Guanajuato, Mexico, assembles more cars than anywhere else in the country. General Motors assembles its trucks and SUVs at its Silao plant there.

SAMOT Mexico runs a lot of cam operated multi-spindle screw machines, such as Wickman and ZPS, as well as INDEX CNC Multi-Spindles. The company also has its own in-house anodizing line.

Gradually, SAMOT has been decreasing its use of cam screw machines, to focus on more complex parts.

Rogério says that Mexico has a decent skilled labor force. He says that Mexicans on the whole have good manual skills, and they like to work with their hands. Nevertheless, he is still dealing with a skills shortage.

SAMOT Mexico’s industrial park has 120 companies with over 30,000 workers. Currently, there are 1,000 open positions throughout the industrial park, including 10 vacancies at SAMOT.

Toyota, Honda, and Mazda assemble cars in Guanajuato. They have elected to bring over a lot of workers from Japan at all different levels, not just upper management. According to Rogério the Japanese working culture is so different than the local culture that Japanese firms would rather import their own people.

Salaries for Manufacturing Workers in Mexico.

Rogério broke down manufacturing labor costs in Mexico into US dollars. For a machine operator, the labor cost is around $1,000 per month. Skilled technicians cost $1,000 to $1,500 per month, and managers cost around $5,000 per month.

Meanwhile, the salary of a doctor in Mexico averages around $1,000 per month. Rogerio’s wife studied to become a doctor when she moved with him to Mexico. He says the country has high quality medical schools available for a very reasonable price.

Rogério says he sees a lot of companies in Mexico bringing in more sophisticated machines such as INDEX CNC Multi-Spindles.

SAMOT is trying to diversify its product line in addition to traditional automotive. The company is purchasing new types of CNC machines for making lower volume, more complex parts for the industrial sector and electric cars.

Question: Does it bother you less if manufacturing work is outsourced to Mexico rather than China?