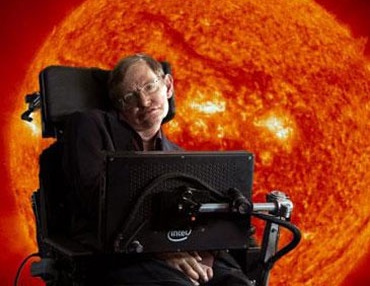 When did the universe begin? Why is there something rather than nothing? Why are the laws of nature so finely tuned? Is this “Grand Design” evidence of a Benevolent Creator? Or does science offer an alternative explanation?

The Grand Design by Stephen Hawking and Leonard Mlodinow presents the most current scientific thinking on these questions in an easy to read but difficult to understand 200-page book. After reading and re-reading several portions of the book, some light bulbs went on in my head, and I began to understand something about relativity, quantum physics and cosmology. I will try to condense their 200 pages in the hope that you good readers will understand some of the most important concepts. You may not agree with everything, but hopefully you will gain some understanding of what is being discovered in modern science.

First is the concept of space and time, and how they are impacted by gravity. In relativistic terms, time is merely another dimension, like length, width and height. The presence of matter and energy can warp space and time just as a bowling ball placed on a bed warps the surface of the bed. This effect is called gravity. A very large and heavy ball warps the bed even further and can cause the bed to collapse on itself. This is a crude description of a black hole that so warps space and time that matter and even light cannot escape its boundary from within. From observations of black holes, time seems to slow down and stop at its boundary.

Second is the big bang theory. Many scientists, beginning with Edwin Hubble, have analyzed the light spectrum from far away galaxies and determined that all galaxies are moving away from us, and the farther away they are, the faster they are moving. From the rate of expansion we can extrapolate into the distant past and determine that about 13.7 billion years ago, all the energy and mass of the universe was concentrated in a very tiny region of unimaginable density and temperature (the ultimate black hole).

Time, rather than being constant and linear, bent back on itself in this region and did not exist until the big bang. This is crucial because in the authors’ view, before the big bang, there was no time, no space, nor any Benevolent Creator to set it all in motion.

Third is the concept of multiple universes. This becomes more difficult to comprehend and accept. The physics models and accompanying math calculations that describe the quantum nature and evolution of the universe starting from the big bang lead to the conclusion that multiple universes are constantly being created and are disappearing like bubbles in soda pop. Some of these universes have a greater probability of existing than others and expand in an inflationary manner forming galaxies, stars and in at least one instance a planet like earth with beings like us. Those universes with low probability evaporate. Hawking believes that this spontaneous multiverse creation concept avoids the need to invoke a Benevolent Creator to explain creation.

Finally, the universe can be created out of nothing. Matter is an equivalent form of energy (E=mc2). Because gravity is attractive, gravitational energy is defined as negative. It takes positive energy to separate a gravitationally bound system, like the earth and moon. The total energy of the entire universe is in balance and must always net to zero. Thus the negative energy of gravity balances the positive energy needed to create matter. Gravity is a force that exists, and because there is gravity, a universe can and will create itself from nothing. Something called “M Theory” describes this spontaneous creation process. Hawking believes M Theory is the only candidate for a complete theory of the universe, something which Einstein was searching for, and now Hawking and others are working to complete.

Hawking might paraphrase the first verse of Genesis to something like, “In the beginning, Gravity created heaven and earth.” Whether one accepts this or not, the true miracle is that the mind of man can develop a theory that predicts and describes all the amazing phenomena we observe throughout our vast universe.

Question: Does a plausible scientific explanation of creation affect your religious beliefs?

Question 2: Whose team are you on, Stephen Hawking’s or Tim Tebow’s?