One on One – Dr. Dennis Hong 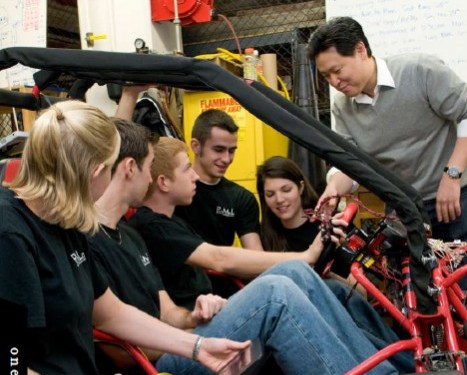 Dr. Dennis Hong is an associate professor of Mechanical Engineering at Virginia Tech and the director of the Robotics & Mechanisms Laboratory (RoMeLa). He is also faculty advisor for the Blind Driver Challenge, a project to develop a vehicle that can be driven by the blind.

What brought about this project?
DH: In 2004 the National Federation of the Blind (NFB) had announced a challenge to the research community to develop a car that can be driven by the blind. [Virginia Tech] already had a fantastic research program in fully autonomous vehicles, finishing third at the DARPA Urban Challenge. We thought that this was a very challenging project, and so far we’re the only team that has accepted the challenge.

What is the goal of the project?
DH: The immediate goal is to develop a car that can be driven by the blind, but there’s a more important aspect to it. We want to show society that blind people have the capability of handling complex tasks. We also want to give hope to the blind about what kind of freedom technology might eventually provide them. We’re also interested and excited about the potential spin-off technologies from this project, such as early warning detection systems for the safety of sighted drivers, and technology that can be used by blind people in nondriving applications, like the use of everyday home appliances.

How does the system work?
DH: There are three parts to it. Part one is perception. Because the person cannot see, the car needs to gather information about its surroundings. The main sensor of this Version Number 1 uses a laser range finder. A small laser shoots out from the front—it’s like a laser pointer that you use in a presentation. If there is an obstacle in front of it, it bounces off and measures the time of flight of the laser beam. You know the speed of light, you know the time, thus you can calculate the distance to the obstacle. The laser range finder scans in front of the vehicle and builds a map around the vehicle. Part two is computation. The computer takes the map of information and calculates the safest way to drive—which direction and what speed. Part three is probably the most difficult—non-visual user interfaces. How do you convey this high bandwidth of real information to a driver who cannot see? First of all, the car has a seatbelt that looks like a vest or harness. The vest vibrates in different patterns, and those patterns give speed information to the driver. For directional information we have a steering wheel. We call it the “Click Wheel” because when you move it, it makes “click, click, click” sounds. An audio system with headphones then gives commands like “three clicks to the left,” or “five clicks to the right.”

So the results have been good?
DH: We did some testing that was successful, but that’s not the end of the story. It turns out we had what we call the “backseat driver problem.” People can drive it, but it’s not that fun. People don’t feel the freedom because the decisions are made by the computer telling them when to stop, when to go, turn left, turn right.

What can you do about that?
DH: We’re changing the direction right now. We’re working on the second version and we have a prototype that we use on the first version of the vehicle. We call this device AirPix. Think of it as a computer monitor for the blind. It looks like a tablet. There are a lot of small holes on the tablet and compressed air shoots out of them in certain patterns to display the map around the area (used from information from the laser range finder). When the person puts his or her hand over the device they can “see” the environment and then make an active decision how to drive.

Are you gong to be testing the car on regular roads?
DH: In July 2011, the second generation Blind Driver Challenge vehicle will be driven by a blind person from Baltimore, Maryland, to Orlando, Florida, which is about 900 miles. It’s going to be a combination of highway and regular road driving. The details are not set yet.