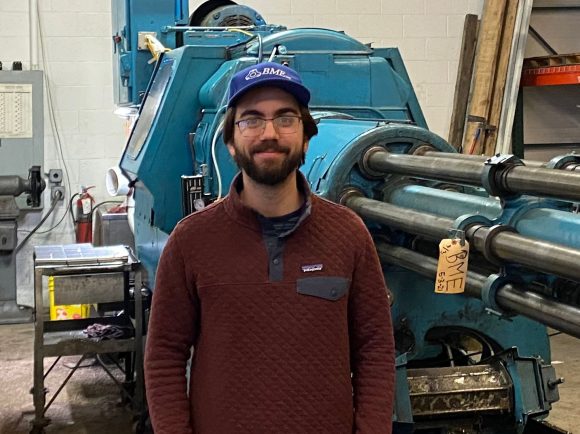 Elliott and I talked about a lot of fascinating things in this interview. How to keep old mechanical beasts relevant, getting young people into machining, and what it’s like to work closely everyday with your dad—who’s also the boss.

Elliott says that customers come to BME when they want to make a part on a cam screw machine but can’t figure out how to make it happen. The company offers an extensive line of proprietary attachments such air operated pickoff assemblies, rotary recess attachments, and synchronized slotting/milling attachments.

Elliott’s father, Brett, started BME 15 years ago. Nine years ago, Elliott started working at the company at age 14. His first job was cutting steel bars with a bandsaw. Later he worked in shipping and receiving, and then graduated to assembling attachments for multi-spindles. After studying engineering for a few years he began working in tandem with his father engineering attachments. Generally they are tasked with tweaking attachments already in their product line to suit the jobs of specific customers. A few times a year, they are called upon to engineer more novel devices, when a customer’s job calls for something special that they haven’t invented yet.

Elliott says his father, Brett, is the “idea guy.” Brett analyzes what he wants to accomplish, then Elliott puts the idea down on paper (often CAD). They both are constantly putting their heads together to solve problems. It’s not uncommon for the two to stand at several whiteboards for long periods of time, brainstorming various drawings, trying to work out a solution. Elliott says they have a good chemistry at work, and over the years his role has changed as his knowledge and skills have grown. He admits that when he was younger and less experienced he may have been too overconfident in his ideas and he had to be put in his place. But nowadays, it sounds like he is genuinely challenging his dad in the engineering room.

As a used machinery dealer myself, selling old cam multi-spindles, I grilled Elliott on a lot of the same questions we grapple with at Graff-Pinkert, our family business. I asked him if rebuilding old multi-spindles from the ground up, particularly Acmes, was a good business to be in. Graff-Pinkert still refurbishes some cam multi-spindles such as Wickmans and Davenports, but the work we do is much less comprehensive than that of BME. Also, we stay away from doing a lot of work on Acmes. The parts for Acmes can be very expensive, and the Acme rebuilding process is extremely labor intensive.

For a rebuilt Acme, BME charges several hundred thousand dollars. The price depends a lot on what kind of turnkey the customer requires, if any. Elliott says the rebuilding and attachment businesses compliment each other. Often the rebuilt machines come equipped with BME’s proprietary attachments. He says he believes the cam multi-spindle business has a significant future because the machines are often still the best option for high volume jobs, assuming companies have the personnel to run them.

I asked Elliott why it’s a struggle to get young people to go into manufacturing and an even greater struggle to get them to run old multi-spindles. He says manufacturing has to shake off its bad reputation from the past, as having a top-down style of management that doesn’t care about the needs of employees. He suggests that if manufacturing employees could count on a clean, pleasant work environment, and felt supported and heard by management, more people would want to go into the field.

Working with His Dad

I was very curious to get Elliott’s perspective about working closely with his father, as I also work with my father. I asked him if he felt like he was in a strange position as someone who is not the boss, but also not a normal employee either. It’s a position that I’ve often analyzed for over a decade.

Despite being only 23, Elliott says he has the advantage of having the longest tenure at BME of all its employees. He also says because of his experience and confidence in his ability, he earns the respect of his coworkers. I remarked to him during the interview that he often referred to his dad in the third person as “Brett,” rather than “my dad.” He says it’s a useful way to draw less attention to himself as the boss’s son, even if everybody knows he is. I personally have seldom used this strategy because referring to my dad as “Lloyd” just feels strange. But I admit that I sometimes refer to him as “the boss,” or some other euphemism, when I’m talking about him at work.

It was Brett’s idea for me to ask Elliott to be on the podcast. I could genuinely feel his enthusiasm about the idea when he suggested it to me over the phone. I joked to him that it seemed like he was really “kvelling” about his son excelling in the business. He easily inferred the meaning of my Yiddish.

After interviewing both Brett and Elliott, it’s clear to me that both men share a passion for the nuts and bolts, and working together.

Question: What’s something important you learned from your father?