Pay For It If You Believe In It 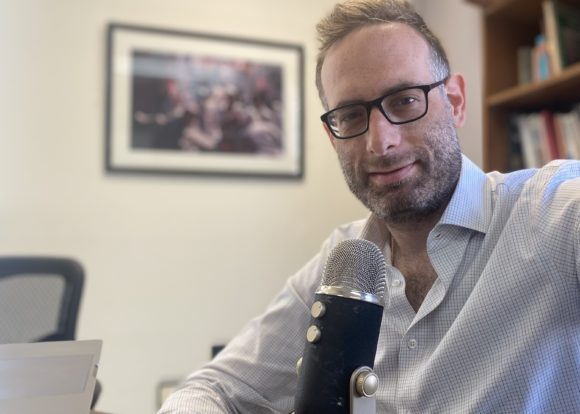 If you really wanted to buy something that you thought could be important in your life, would you be willing to walk away from the opportunity because the price tag seemed higher than it should be or because you felt offended by the seller? I ran into this dilemma this week.

As most of you readers know, Today’s Machining World puts out a podcast called Swarfcast. We just published our 161st episode. I’m proud of the show’s quality, and I’m grateful to the thousands of people who take their time to listen to it or at least read the episode summaries. But I’m still frustrated by its modest reach. I know it has the potential to grow its listenership exponentially. I just need to learn the system to make that happen.

Late on a Saturday night a few months ago, I saw a paid ad on my Instagram feed for a podcast coaching program that boasted it could boost my show’s downloads 20-100% per month. The program’s charismatic owner in the video persuaded me to check out his his free podcast about how to make an independent podcast into a profitable business.

After listening to the podcast I was impressed, so I signed up for a consultation to learn about the program and hopefully enroll in it. I liked program’s sales guy. He was a great listener and also a podcaster who had completed the program himself. He got to know me and learned a bit about Swarfcast. I thought I had made a good impression on him, but at the end of the meeting, he told me the program didn’t seem like a good fit for me at that point in time. He suggested I try using some of the principles explained on his boss’s podcast on my own and then he would circle back to me in the future.

I was surprised and intrigued by this outcome, and I was a bit disappointed. Did the course have such high standards for its participants that it didn’t want me or my money? It made me wonder what would happen if Graff-Pinkert required customers to convince us they had the work to justify purchasing a machine before we allowed them to? Could that business model work?

A few months later, the sales guy wrote back to me, asking if I wanted to reconnect. I said I was open to it, but I wanted to know why he had rejected me the first time. He responded saying that it didn’t seem like I was “all in” at the time. That may have had something to do with having just become a first time dad only two months before.

So, on Monday this week we talked again, and this time the sales guy deemed me worthy for the program. I was excited, but I knew it was going to cost quite a bit of money. I just hoped it wasn’t ridiculous. I wanted to pay for the program. I didn’t want the funds to come from Today’s Machining World because I wanted skin in the game. This was my personal investment in the podcast, which I believe has great upside.

The price was indeed quite a bit higher than I had expected. Then the sales guy said if I signed up at that very moment I would save $1,000. I was shocked and offended by this pressure sales tactic. I reasoned with him that I could not make a decision like that right away. I had to talk to my wife, I needed to sleep on it, and I needed to talk to some other people who had done the program. So, we made a deal that we would meet again online Wednesday afternoon for me to make my decision on the program and get the “reduced” price.

I called three former participants of the program, all who had paid a fraction of the price I was quoted because they had joined the program in its early stages two years ago. It had been a new business trying to get off the ground and did not offer nearly as many resources as it does now.

I really liked getting to know these fellow podcasters. They all had good things to say about the program, but all of them said the price seemed high and suggested I should try to negotiate.

The pressure sales tactic was still bugging me. It also bugged me that if they had accepted me when I applied months ago, the price of the program would have been lower. However, what bugged me most was that I really wanted to join the program, and the stupid sales tactics and higher price than I had hoped for was taking my mind away from the important thing, the possibility that this program could be a game changer for Swarfcast and Today’s Machining World.

My mind wasn’t clear. I talked to my wife Stephanie about it, and she agreed with my sentiments. She was annoyed about the price of the course, but supported my decision if I still wanted to do it.

Tuesday night, I thought about what my dad, the great Lloyd Graff, would advise me to do. When Graff-Pinkert is negotiating a deal, he usually tells us to try to not be “too cute.” That means when we want to invest in a deal that we really believe in, it would be stupid to lose it because of a slight difference in price.

My scenario also made me think about the people who have decided not to buy a used machine from us because we wanted $100,000 and they only wanted to pay $90,000—for a machine they could not find anywhere else and that over the years could make them 10 times our asking price.

I also thought about another thing my dad says when we are considering buying a machine that we are not that familiar with. He says, “if we buy the machine, then we can learn about it.” We can learn its market value and how it works. Owning the machine could lead to new contacts and new chances for serendipity.

On Wednesday I went into my follow-up meeting feeling like I was in a tough spot. I wanted to negotiate, out of principle, but I didn’t want to walk away because the program was something I really wanted to do.

I first told the the sale guy I was offended by his forced sale tactics. He said he appreciated my feedback. I then said, “I really want to do this program, and though I want to negotiate, I’m not going to play hardball and threaten to walk away.” But, I asked him if he thought it would be ridiculous for me to receive the price that was available when I had first talked to him months before. He responded saying that he normally didn’t do that, but he would do it for me because he could now tell that I had been serious about doing it the first time we met.

I paid a lot of money for the course. Or, maybe in reality it wasn’t a lot of money. It isn’t a lot if the course does for me what I hope it will. In any case, I feel good about the purchase. I’m excited about it because I believe in it.

Question: What courses or coaching have you had that really helped you?