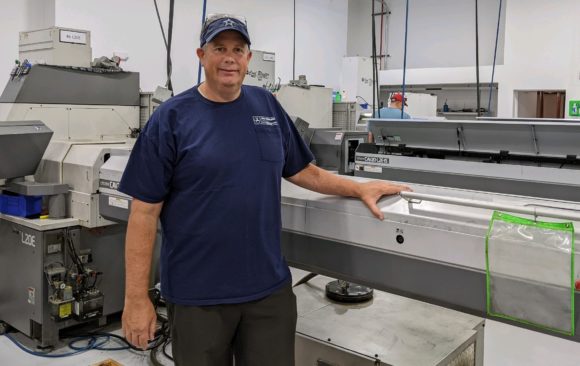 Our guest on the podcast today is Shawn Gaskin, owner of Swiss Technologies of New England and Stone Medical in Plainville, Massachusetts. Shawn started Swiss Technologies over 20 years ago, with one L20 Citizen making parts out of sterling silver for Tiffany and Company. Over the years, his company has grown into a diversified shop, doing a significant amount of medical work. If you want to learn about the medical Swiss components business I recommend you check out this interview.

After high school, Shawn worked for a friend of his dad’s who owned a jewelry factory. The company purchased a Citizen L20 Type V Swiss lathe to make parts out of sterling silver for Tiffany and Company, which went into items like key rings, pill boxes and whistles. Shawn characterizes machining sterling silver as across between machining aluminum and titanium. It produces chips like aluminum and the has the abrasiveness of titanium.

The jewelry company rented space for the Citizen in a nearby machine shop, where Shawn was tasked with learning to run it. After several years, Shawn’s boss gave him the opportunity to find more work for the Citizen, giving him a 15% commission on what he brought in. Eventually, Shawn started his own company, borrowing $40,000 from his parents and $80,000 from his former boss, who he then supplied parts for. He built Swiss Technologies starting with the original 1997 Citizen he had learned on.

Eventually, the jewelry job slowed down, so he was forced to find new work. He caught a huge break getting a job running parts that went into ATM machines. In a single purchase order, Swiss Technologies went from doing $450,000 in sales to $2.4 million. Unfortunately 60% of the company’s business came from one customer. In 2015, when the ATM machines got a new design, the work went to China, taking away 35% the company’s revenue.

Shawn knew he needed to diversify, so he increased Swiss Technologies’ sales and marketing and obtained ISO 9001 certification, which increased the company’s customer opportunities. In 2018, the company obtained ISO 13485 certification for medical work. Shawn characterizes this big move into medical as an overhauling of the business.

Swiss Technologies got its first medical job when a shop nearby had an overflow of work. Shawn says he realized medical work was a good place to be when he went from jobbing machines at $50-$60 per hour to $125-$150 per hour.

Shawn says Medical work is generally categorized as external or internal. External medical work signifies making parts for medical devices such as IV pumps or syringes, while internal medical work refers to implantables, parts that are put into the body, such as bone screws.

Often medical customers want suppliers to have all of their processes in-house, such as anodizing, passivating, deburring, and laser marking. Swiss Technologies and Shawn’s other company Stone Medical don’t offer all of those services, which adds to the challenge of competing in the medical parts arena.

Advice for companies wanting to get into Swiss Machining

Shawn says “bigger is not always better” for a Swiss machining company. He thinks a company can be successful with three or four employees and four to six machines. He encourages ambitious people to not be afraid to start with one machine making parts in the garage because there is a lot of work out there for companies who have low overhead.

For companies trying to break into medical work, he recommends trying to get Tier 2 work to begin with.

Shawn says if he could go back and time and do things differently at his business he would have trained his people better. When he was making high volume parts for ATM machines, the shop’s machines needed few change-overs, so his people didn’t develop their skills setting up new jobs. He says today he has the best crew the company has ever had. He makes a point of training his people to think independently by giving them time to struggle with problems in shop, even if it means machines are down sometimes.

Shawn says he usually gets on the shop floor two and half to three hours a day. He says it’s good to show his employees he is with them in the trenches, to help them solve problems and for him to understand what is going on in the shop. But more than that, he is on the shop floor because of his passion for Swiss machining. He loves the equipment and the processes. He needs to get his hands covered in oil like he did when he started on his first L20, which is still in use today.

Question: What are your favorite type of parts to make?