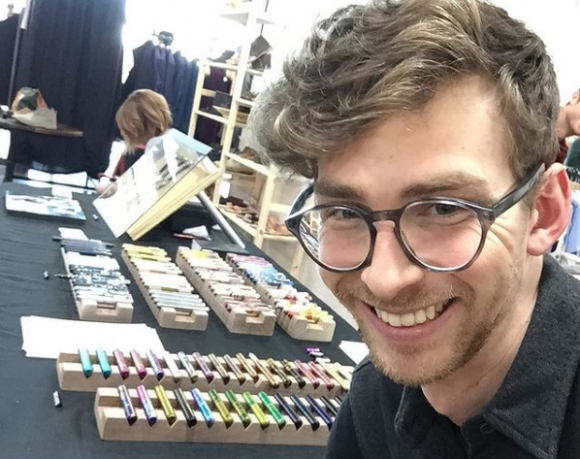 Today’s podcast is the final segment of our season about companies who produce their own products.

Our guest is Ian Schon, founder of Schon DSGN, a company that makes high quality metallic pens machined on Citizen CNC Swiss lathes. One of Ian’s core philosophies for the production and marketing of his pens is to tell the story of their creation.

Scroll down to read more and listen to the podcast. Or listen on your phone with Google Podcasts, Apple Podcasts or your favorite app.

The summer after Ian’s Freshman year at Boston University, he and his brothers bought a 1940s Clausing lathe on Craigslist and started machining all kinds of things in their parents’ garage, including his first pen. After graduating with a degree in engineering, Ian got a job as a product designer. He started his own company on the side, creating pens and watches, back in 2012. Two years ago, Ian finally started manufacturing pens and watches full time. He distributes his pens in stores all over the world. He also sells at pen shows and on his website.

One of the defining aspects of Ian’s pens is that when you look at them you can see how they were made. The clothes are off. The full monty of the machining process is proudly on display for an onlooker to see. The pens are made of brass, copper, titanium, aluminum, and stainless steel, presented in a variety of bright colors and finishes. They have precise visible threads for fastening their components. They feature distinct exterior textures from processes like knurling or milling—outwardly telling the story of their creation.

The moment I started talking to Ian, the word that came to my mind was “passion.” He is passionate about both designing and manufacturing his products—ballpoint pens, rollerball pens, and fountain pens (listen to the podcast for an explanation on their differences). He gushed about the setscrew design he came up with to secure the ink cartridges in his pens. He also loved talking about machining on his used Citizens, L20s and L16s from the mid ‘90s, which he holds in the highest regard.

He says he sees himself as both a designer and a manufacturer, and says he could not create his products the way they are if he was not both.

He markets his pens and other products by telling the story of their creation. He makes videos of himself designing the pens, as well as videos showing himself working on the Citizens—setting up tools, changing programs, or managing pesky swarf.

He says his loyal customers care that his products are made by a person who they can get to know, whether through social media or in person at pen shows. “The journey is as important as the destination,” he explained.

Question: What is your favorite type of pen?