Ep. 49 – Sebastien Schmitt of Staubli on Robotics in Diverse Fields 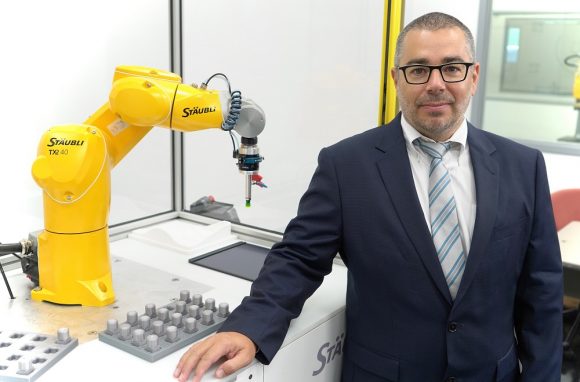 On today’s podcast we interview Sebastien Schmitt, North American Robotics Division Manager of Stäubli, a prominent robot producer from Switzerland. Sebastien explains how Stäubli focuses on building robots to help produce smaller automative components for car interiors and parts under the hood rather than assembling large car bodies like some of its competitors.

Sebastien also discusses Stäubli’s TX2 Robot, a model which can be used in a collaborative or a standard industrial mode, plus the importance of working with robot integrators who are specialized in their specific fields in order to get the most out of robots.

Highlights from the podcast include:

(2:44) Sebastien Schmitt discusses the history of Stäubli since the company’s inception in 1892 in Switzerland as a producer of textile machines. Later Stäubli got into the connector business, and in 1980s it entered the robotics field.

(6:10) Sebastien discusses the specialty areas for Stäubli robots. He says that 50 percent of industrial robots are utilized by the automotive sector. Stäubli focuses on the production of smaller automotive components such as car interiors and parts under the hood. Other robotics companies produce a lot of larger robots for welding and assembling car bodies.

(18:30) Sebastien explaines Stäubli’s philosophy of partnering with integrators who are specialists in the field of an application rather than using an in-house integration department.

(23:25) Sebastien discusses statistics which show that when countries bring in a lot of robotics into their infrastructure their unemployment rate actually decreases.

(25:55) Sebastien discusses how he got into robotics. He talks about his upbringing in northeast France, an area once known for mining. He was influenced by his father, a mechanic who was the first in his family who didn’t go into mining.

(29:43) Sebastien gives his preference for the film Short Circuit over The Terminator.

Question: What task do you wish you could give to a robot?