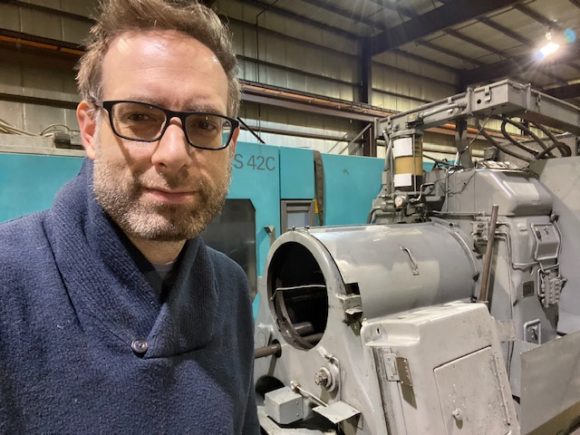 Share
Facebook Twitter LinkedIn Pinterest Email
Back in February I had the pleasure of being interviewed on the MTD Podcast, an excellent podcast about machining in the UK. Hosts Joe Reynolds and Giovanni Albanese grilled me about a lot of our favorite topics featured on Swarfcast, like treasure hunting, reshoring, Trump, and Swiss CNCs, which my British counterparts often call “sliders.”
Scroll down to read more and listen to the podcast, or listen with Google Podcasts, Apple Podcasts or your favorite app.

I explain the origin of “Pinkert” in “Graff-Pinkert,” our used machine tool company’s name. It comes from Aaron Pinkert, my grandfather Leonard Graff’s cousin and business partner. (2:10)

I explain to my hosts how I got into the machine tool business and journalism. Back in 2005, my dad, Lloyd, lured me to work at Today’s Machining World with the idea of making streaming videos to accompany the magazine’s print content. It was a good idea, but it was one or two years before Internet broadband was good enough for it to be practical. Meanwhile, I honed my writing and editing skills working on the print magazine. In 2011, when Today’s Machining World became an all online publication I joined Graff-Pinkert, becoming a machine tool dealer (AKA treasure hunter). We continued to develope todaysmachiningworld.com and created Swarfcast in 2018. (3:00)

I elaborate more on my chosen occupation title of “Treasure Hunter.” I explain that my job as a used machinery dealer consists of combing the earth for valuable assets. “Treasure hunting” seems more romantic than “buying and selling dirty, oily, old machine tools that people don’t want anymore.” Giving myself the title reframes the essence of the occupation, making it more fun and interesting. “Treasure hunting” also relates to the serendipity factor of my job. Often I go into a shop to look for one thing but find something entirely different that is more valuable than what I came for originally. (7:20)

We talk about the CNC Swiss market in the United States. I tell my hosts that if you can find a good used sliding headstock machine from the last 15 years you’ve found treasure. It’s the number one item Graff-Pinkert’s customers are asking for these days. (10:50)

I explain that none of the experts we have interviewed on Swarfcast have given us an actual example of reshoring in the United States—only anecdotes of people quoting work and theories saying that the stars are aligned for work to come back to the US. I mention a podcast in which we interviewed Yossi Sheffi, a supply chain professor at MIT, who told me it is impossible for a lot of manufacturing work to leave China because companies there already have a vast ecosystem of intertwined suppliers and vendors. (12:00)

Joe Reynolds asks me how I think Joe Biden’s presidency will effect US manufacturing. He asks if I think he will be an advocate for manufacturing like Trump. I admit to my hosts that though I loath Trump, when he was elected, Graff-Pinkert’s business got an immediate boost. I explain that it’s pretty typical for American business owners to feel happy and confident when a Republican is elected President. I explain that Trump made manufacturers’ lives easier with his tax bill and relaxed environmental regulations. Many manufacturing company owners felt confident in his policies and energized because they felt they had a president on their side. (15:30)

We talk about why a lot of Graff-Pinkert’s customers, many in the Swiss machining business, had their best years ever in 2020. This was partly do to opportunities in the medical field relating to COVID-19. Though we also know of many thriving Swiss shops, making products unrelated to COVID-19 such as dental implants or components for eye surgery. (20:00)

We talk about social media’s significance in the manufacturing business. I tell my hosts about one of Graff-Pinkert’s clients who says they have gotten business from posting instagram blooper videos of parts they had to scrap. (24:20)

I brag to Joe Reynolds that Today’s Machining World has been referring to its editorial content as “Swarf” since its inception in 2000, which was prior to the creation of MTD CNC’s YouTube channel “Swarf and Chips.” (30:20)

Question: What events led to your current career?