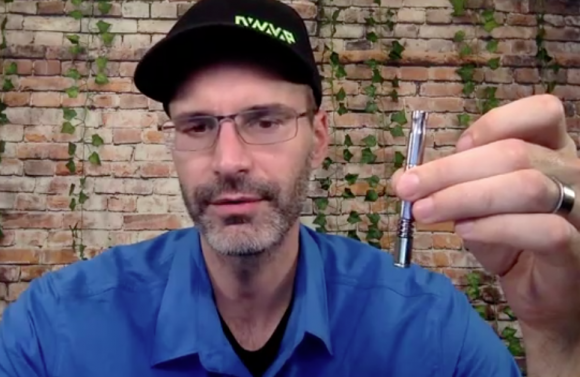 Scroll down to listen to the podcast with George Breiwa.

About two months ago I got a call from a company asking for a price on a Traub TNL18 on our Graff-Pinkert Website. For those unfamiliar, Traub makes arguably the heaviest, most expensive and advanced CNC Swiss machines on the market—the “the Hummer of CNC Swiss” one could say. I asked the caller what his application was, thinking it was a medical part to justify such an expensive machine, but the caller told me it was for making a unique vaporizer that had no moving parts and no battery.

George Breiwa started his company DynaVap to produce a mechanism called a VapCap that gives smokers of tobacco and other substances (one legalized this week in Canada) an alternative to smoking. People have built vaporizers for a long time, but what makes DynaVap’s VapCap unique is that while other Vaporizers require a power source usually from batteries or a wall socket the VapCap operates using heat from an external source such as a lighter or candle.

In the interview Breiwa discusses DynaVap’s evolution from making its first pieces on South Bend Lathes to ordering its first new Traubs. He explains his philosophy to make simple yet elegant parts using complex CNC equipment which he hopes will make an impact.

You can learn more about DynaVap at www.dynavap.com.

Question: Can a solo inventor with a South Bend Lathe still change the world?