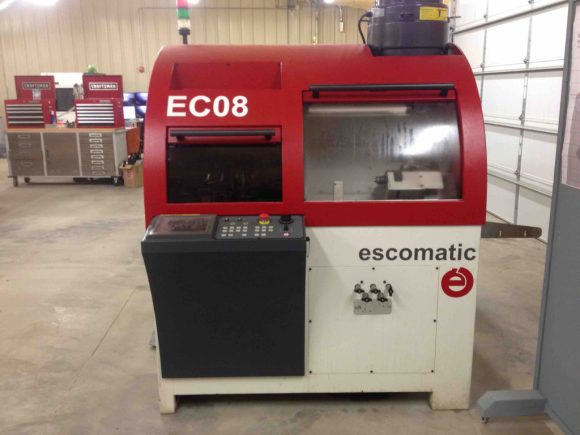 I have to laugh when I reminisce about a machinery deal we made last year.

It all started three years ago, when a machinery dealer in Texas called us about a powerful yet very specialized used screw machine that belonged to one of his good customers. The machine was a beautiful, virtually unused, Swiss made, Escomatic EC08, Mfd. 2013. It was a 6-Axis, CNC, coil-fed screw machine with a max rpm of 10,000 that could machine parts up to 8mm diameter and 100mm in length. It was a powerful machine for the right job, but I would not be shocked if less than 50 models of its ilk existed around the world.

So who owned this machine?

Remember the horrible shooting in Las Vegas in 2017 that killed 58 people? One of the things that made that horror possible was the bump stocks that were attached to 13 semi-automatic weapons belonging to the shooter. For those who don’t know, bump stocks are attached to semi-automatic rifles to mimic the rate of fire of automatic rifles. After the shooting, a federal agency banned them. Supposedly, the owner of this Escomatic EC08 had produced those bump stocks, a machining job that was no more. Just to clarify, I don’t think he used this Escomatic to produce parts for bump stocks, he just happened to be the guy who made them.

In any case, this machine had 400 hours on it and had sat in a warehouse for several years. We see this story play out sometimes in our business. A beautiful new machine is bought for a specific job, and that job never even started. Then the machine sits, because the owner has more important things to do than fuss about getting rid of a moderately expensive piece of equipment (I think around $300,000 retail) that few people in the world have even heard of.

Because there are so few Escomatic EC08 machines in the world, particularly in the United States, it could be valuable but also the kind of machine you would never want to buy for stock. Graff-Pinkert peddled this machine for years. Once in a while, a customer would flirt with it, but nobody had ever come close to buying it.

Then one day, I was contacted on the internet by shop owner in the Czech Republic interested in the machine. We sent an email quote and he immediately accepted our offer, sight unseen. It was surprising but not unprecedented.

But, if there is one thing I have learned in the used machinery business, very few deals are easy. When a company overseas that you have never heard of instantly agrees to buy a machine that no-one else has ever been interested in, it’s good to take a breath and remember that no deal has been made until money is in your account.

But this customer truly was ready to pay and take the machine immediately. They didn’t want to come inspect. Covid was rampant at the time, and the machine was in the middle of nowhere Texas. Besides, it looked perfect and had been run 400 hours, probably just for testing. But before they wired the full payment, they asked Graff-Pinkert to guarantee that the machine was in good condition. We could have held our breath and done that, but it didn’t seem wise.

We did not feel comfortable guaranteeing a machine that had not been turned on for at least three years. We suggested to the customer that they pay for someone to inspect the machine and get it going. They agreed without hesitation.

The machine was deep in the heart of Texas, in a town of a little more than 200 people. We needed a CNC ace, who didn’t mind taking a roadtrip to the middle of nowhere to wrench on a machine he probably had never heard of. We called up my friend Chris, a customer who had purchased Citizen M32 not long before. Chris lived in Houston, five and half hours drive from the machine. He had worked for Citizen prior to cofounding a production shop and still loved servicing machines. Chris was nicknamed the Mad Scientist of machining because supposedly he could fix anything. He was the perfect man for the job! (By the way, we did a great podcast interview with him a while back).

Chris drove 350 miles to the 200-person town to get to work on the machine. The machine didn’t turn on. But why, if it had run only 400 hours? Because rats had gotten inside it and chewed up wires in the back of its PLC. The rats were gone long before Chris got there, but he could see their old droppings. There was no reason for them to stay there because there ain’t much to eat inside a virtually unused screw machine.

The PLC control was beyond repair, and we prayed it was the only problem with the machine. I called up Tornos USA, who used to distribute the machine, to purchase a new one. Tornos was helpful, but it took over a month to get the part sent to Texas. Chris traveled back to the machine and we crossed our fingers that it would turn on. It did!

And we lived happily ever after.

Sometimes the stars do align. Serendipity leads a machinery dealer in Chicago to the impossible to find customer or the impossible to find machine. In this case, a shiny, red, rat infested but immaculate, coil-fed CNC screw machine from Switzerland, likely sent to a 200-person town in Texas for making bullets (that were never made), then revived by a CNC mad scientist before being sent to the Czech Republic, where it likely was repurposed for medical work.

Question: What are the strangest machinery deals you have been involved in?