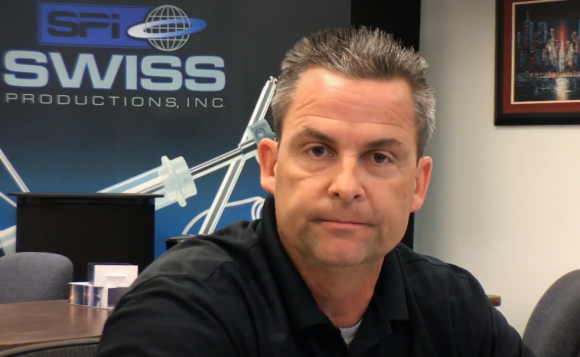 Recently Swiss Productions introduced two 7-axis collaborative robots to work in tandem with two Haas CNC mills. Timo says the robots increase the production on each machine by the equivalent of 30-40 hours per week.

(3:00) Timo discusses his background. He Joined Swiss Productions at age 20 when he married the owner’s daughter. He has worked his way up from the very bottom to Vice President and General Manager.

(6:00)  Timo describes how Swiss Productions grew from an 8,000-square-foot shop with just 12 machines to a 25,000-square-foot facility with over 50 machines. He says 70% of the company’s business is making medical device fluidic components. It also manufactures parts for irrigation, automotive, and aerospace industries.

(7:55) Timo speaks about the company’s unique experience manufacturing parts for the medical industry. He says a major part of growing in that sector is networking and developing relationships around the world.

(10:40) Timo talks about introducing collaborative robots to the machine shop. The company recently purchased two OB7 cobots from Productive Robotics. Timo says the company chose that brand because it seemed to be very user friendly and features 7-axis models.

(12:20) Timo says that at first employees were suspicious about the role of the robots in the shop. However, soon they realized that their jobs were not at risk and that the robots handled tedious labor, which freed them up to complete more interesting tasks.

(14:40) Timo discusses the uniqueness of the OB7 model and how it is programmed through demonstration.

(15:45) Timo speaks about how the shop has increased the productivity of their two Haas mills by 30-35% using collaborative robots. He estimates the shop saves 30-40 production hours a week on each machine.

(16:20) Timo says that time is the most precious commodity for both the business and its employees. For the last 10 years, employees at Swiss Productions have enjoyed a 4-day workweek (10 hour days). He says that automation is playing a part to save the company money and give employees more time with their families.

(19:30) Timo says that Swiss Productions has remained operational throughout the COVID-19 pandemic because it is considered an essential business. He shows a picture of the syringe the company makes components for and describes how it is incorporated in tests for the virus. (see video above) He says last week he learned that the syringe component has been used in over 9,000 tests per day. He says that knowing that the parts his company makes save lives gives him purpose.

(21:00) Timo says he wants to understand how every part his company makes is used and how it makes a difference in the world. He says that sharing this knowledge with employees gives them purpose and motivates them to do great work. He encourages everyone in the machining business to go to work with a passion because it is an opportunity to change the world.

Question: Why are you NOT using robots in your shop?