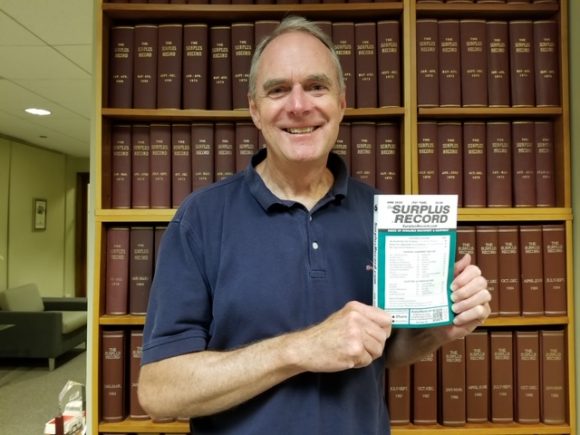 Our guest on today’s podcast is Tom Scanlan, publisher of Surplus Record, an online and printed marketplace for buying and selling used industrial equipment, founded in 1924 by Tom’s Grandfather.

Scroll down to listen to the podcast. Or listen here on Apple Podcasts and Google Podcasts.

(3:00) Tom says Leonard Graff and Aaron Pinkert, owners of Graff-Pinkert, taught him about Wickman Screw Machines when he started at Surplus Record in 1982.

(3:25) Tom says Surplus Record is the only print publication left of used machinery and industrial equipment. He says it is sent out monthly to 137,000 subscribers, 99% in the U.S. and Canada.

(3:55) Tom talks about putting Surplus Record listings on the Web in 1995 after urging from his brother, who was in Silicon Valley. He laughs about how most of the machinery dealers at the time didn’t even know what a website was.

(6:10) Tom says Surplus Record’s Website is constantly updated by machinery and electrical equipment dealers. He says one thing endusers appreciate about Surplus Record is that they don’t have to register to get information. Company names and phone numbers are clearly visible, unlike some other online machinery trading platforms. Also, Tom says Surplus Record’s own contact information is clearly visible on its site for endusers to call if they need credit references for sellers. He says his office gets six to eight calls per day by people asking to confirm if advertisers are legitimate. Tom says he or one of his staff personally visits 90% of Surplus Record’s advertisers, so they can stay up to date with what’s going on at their businesses and who is currently working there.

(10:15) Tom says in the last few weeks several manufacturers have called Surplus Record to make sure they would receive their monthly print editions. They were concerned that during the COVID-19 crisis they might lose access to the Web and not be able to get the equipment they need if it goes down in the shop.

(11:40) Noah says he uses Surplus Record every day for its constantly active free bulletin board of wanted and for sale equipment.

(13:00) Tom talks about Surplus Record first accepting advertisements from auctioneers in 2005. This came about because many machinery dealers were becoming auctioneers.

(14:45) Tom says Surplus Record is very popular for people who need electrical equipment quickly when it goes down. He says the transparent information about Surplus Record’s sellers (company name and contact information) makes it quicker and more user friendly than eBay.

(16:00) Tom talks about his father dying suddenly, which led to him running Surplus Record. He says he was trained on the job by a lot of the company’s clients.

(17:00) Tom says he is happy that his 32-year-old son, Tom IV, is now working at Surplus Record and will become his successor. He says his son still believes in keeping the print publication, but he admits that his son is much more Internet savvy than he is. He says he knows his son will come up with new ways of doing things, just like each successive generation of the 96-year-old company.

Question: Do you prefer reading print or on the Web?