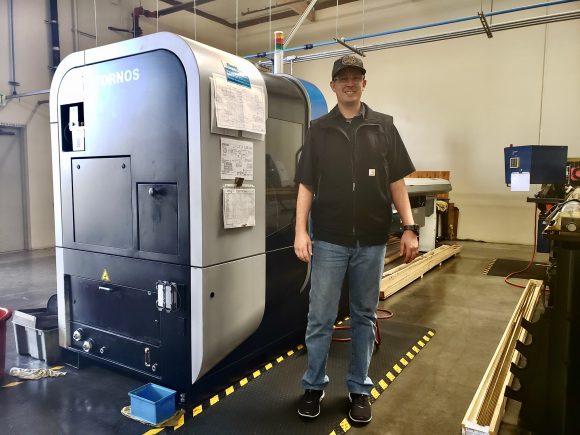 Today’s podcast guest is Travis Erickson of Precision Components of Oxnard, California. Precision Components runs Tornos CNC Swiss lathes, specializing in producing custom mil-spec contacts primarily for the aerospace industry. Travis and his father handle all of the company’s machining and quality duties and employ only three people in their shop.

(2:50) Travis explains the core of his company’s business, custom mil-spec electrical contacts that go into circular connectors for large OEM aerospace companies. The company produces parts ranging from 16mm all the way down to .0013mm.

(4:45) Travis talks about the Tornos Swiss machines at Precision Components. The company has nine DECO 10, a DECO 13a, an EvoDECO 16, and an old ENC 162 which Travis says is practically older than him. Travis says his father bought the first Tornos DECO sold in the United States in 1997 or 1998, a DECO 10 that is still running in the shop today. Travis says the company’s EvoDECO 16 cost around $400,000 new after freight and options. He says possibly other Swiss brands could do the company’s work, but he has no plans to switch because he knows Tornos machines produce the tolerances he needs.

(7:24) Travis talks about the history of Precision Components. His father started the company in 1988. Travis says he is 34 years old and has been working at the company for 11 years since finishing college at U.C. Berkley. The company is literally right around the corner from the Haas Automation factory, but it has never had the need for any Haas machines.

(9:45) Travis says Precision Components doesn’t advertise with a website, despite his degree in marketing. He says the company has a core group of reliable customers, and right now he is not concerned with striving for huge growth.

(10:30) Travis says aside from he and his dad there are only three guys who work in their company’s shop. They handle tasks like parts cleaning, tumbling, deburring, light assembly and monitoring the machines. Travis’s Dad is the primary machine setup person and operator, while Travis handles quality and the company’s business responsibilities. Travis says the company at one point had 11 total people, including two setup guys, but it downsized in 2009-2010, and the setup people left to explore other opportunities. He and his father realized that the company could operate successfully with a much leaner but efficient workforce.

(15:05) Travis says he thinks the machining business will slow down next year because of the Presidential election. He says that the “big boys” like Boeing and Raytheon typically buy a lot of inventory leading up to an election and then wait to see what happens before they start funding new projects.

(17:10) Travis says he knows it will be important to grow more and invest in some employees in the near future now that he is starting a family.

(21:30) Travis talks about the challenges of running a machining company in California such as state taxes, hazardous waste permits and wild fires (which caused this podcast interview to be postponed a week).

Question: Do you wish your machine shop was larger or smaller?