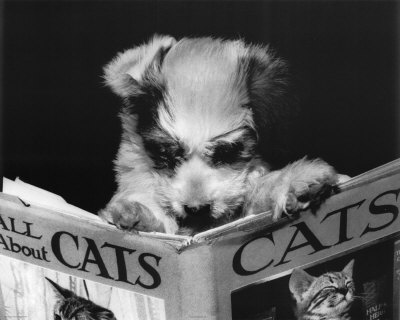 Sometimes you read something so brilliant, so incisive, so right on, you want to jump for joy and call your friends. This came in yesterday from the publication Industry Today. (See if you can make it to the end)

“It has been a long tradition: In December and January, publications—no matter what subjects they cover—like to engage in the game of New Year predictions. That’s why we were excited when IDC presented us with its Top 10 manufacturing industry predictions for 2013, which we—in turn—present to you.

We’re not immune to the Nostradamus impulse. But we don’t assume the role of prognosticator. Rather, as a journalistic enterprise, we like to report on what we feel are the most reasonable predictions. We leave the fortune-telling to someone like IDC (International Data Corporation) Manufacturing Insights, the Framingham, Mass.-based organization that analyzes trends in global supply chain, demand management, product lifestyle management, operations, technology, and sustainability, among many other elements.

We’ve chosen wisely; the organization isn’t a carnival tent tarot card reader. After all, consider what IDC predicted in 2012: emergence of “engaged” organizations, stronger supply chain alignment, IT support of supply chain, increased adaptation of “lean” innovation, greater product lifecycle visibility, factory capabilities focused more strongly on customer demand than just on production capacity, increased efforts toward sustainability, and the advancement of a culture of learning among manufacturers and their employees. If you’ve been reading Industry Today in the past year, you’ll recognize these topics as common themes that thread through our feature articles and company profiles.

It all came true. Indeed, IDC is prescient.

That’s why we were excited when IDC presented us with its Top 10 manufacturing industry predictions for 2013, which we—in turn—present to you:

That last prediction is perhaps the most exciting. We can’t wait to see what’s going to happen next.

Meanwhile, Bob Parker, IDC Manufacturing Insights’ group vice president, offers this observation: “Manufacturing companies are sitting on a record stockpile of cash and, provided near-term uncertainties are resolved, are looking at robust global markets beyond 2013. Also, we are seeing a generational change at the executive levels across all segments.”

The new generation of manufacturing leadership, IDC anticipates, will favor longer term growth initiatives based on advanced technology. So, the emerging leaders are heading into a brave new world, and without fear.”

The Toronto Blue Jays, also-rans for more than a decade, are now the most interesting team in Major League Baseball. They clearly made the decision to go all out to win the pennant this year while competing in the same division as the New York Yankees, Boston Red Sox and Tampa Bay Rays, teams which have been in the elite for many years.

With the acquisition of R.A. Dickey, the National League Cy Young winner of 2012, Toronto has six proven starters, which makes them an immediate contender.

But this is not really a baseball blog today. The intriguing question for me is, why now for Toronto? Why, after settling for mediocrity for a decade, do they decide to finally go “all-in”? This is really a business question that I grapple with all the time. When do you play it safe, stay satisfied with “okay,” try for singles, and when do you swing for the fences, knowing you are more likely to strike out?

Today, in Major League Baseball it is convenient and lucrative to be mediocre. Miami has clearly chosen to be wealthy and crummy for the moment by trading away its expensive stars. Because of national TV and the MLB branded merchandise they have $100 million coming in while fielding an awful team. Sounds like the great Mel Brooks film, The Producers, where Zero Mostel and Gene Wilder try to gather up the money from “little old lady” investors and then produce a terrible Broadway flop.

In the machining business today, you can struggle along, make your salary, fund your 401K and hang around. It isn’t easy, but if you survived 2009, you are probably doing okay today.

The question most business people face going into 2013, with automotive continuing to improve in North America, the oil and gas business in a long term gigantic expansion, China declining as a business stealer, construction waking up, and Silicon Valley driving innovation in the world, is whether to just be happy for surviving the “decade of despair” or to be like the Toronto Blue Jays.

I readily admit that this is a very hard decision. Looking back to 2001, I see a lot of disappointment and carnage. Business has been so damn hard. We have the rise of China, two wars taxing the country, the housing bubble, pathetic partisan politics, an aging workforce not easily replaced, shell shocked lenders–all strong headwinds.

But as I head into 2013, I ask myself why I shouldn’t be like the sassy Blue Jays who are tired of being just slightly better than the Orioles. Tired of being a .500 team, win some, lose some. If not now – when?

For the first time in six years, I am hearing my peers in the machining world start placing bigger bets. Not a lot of them, but I am seeing it, and it seems to be older guys taking their shots, contrary to popular wisdom about baby boomers retiring.

The news of Washington and Wall Street is mostly negative right now. The National media is still in recession mode. But the Toronto Blue Jays, perennial also-rans of the American League, are saying, “This is our time.” If not now, when? How about you?

“I received this comment from a young machinist as a response to my blog from last week, “Is the Skills Gap Just a Pay Problem?” at 1:37 AM Sunday morning. What do you want to say to “a_young_guy”. –Lloyd

“I am just turned 24 years old in September of 2012. I program, setup and run 3X HAAS ST 10 Live Tool C-Axis Lathes, (with no Y=axis). The turret is huge, the tool holders are huge, and the space is very limited, but it does not stop me. I know the haas control like the back of my hand, I program in both metric and inch so fast that the control can not refresh fast enough for me, I have to wait for the control to refresh some times. Im the guy running upstairs and explain to the engineers why holding a cross hole at 1.98mm +.01mm -.00mm (.00039 inch total tolerance ) is not going to happen and not very practical on a production run of 500 – 1000 small parts. I drive solidworks 2012, solidcam 2012, mastercam x6 on the side. I understand GD&amp;T and I can hold a pair calipers. I get a priory list from my boss, I order tools, manage work flow, plan the job, program it, set it up, prove it out, fine tune it, back it up, make tools lists, work instructions, inspections sheets, first articles, you name it, i do it, i make it idiot proof, train the idiot button jockeys, track the paperwork, first article and traceability, mat certs, po’s, w/o’s…

I have many 21 hour days under my belt. I dont drink, I dont smoke. I work, study, sleep and repeat every day. I have zero social life and no commitments outside of work. After 12 hours of work I come home to my room and bathroom that I rent for $650 a month, and I crack open Machining and CNC Technology by Michael Fitz patrick, and CNC Programming Handbook by Peter Smid.

Im looking forward to that day when my brand new screw machine paid for in cash comes in, and I will be able to work for myself, at a very easy and comfortable pase, making an insane amount of money, and no stupid operators or the stupid waste that comes with every big company to deal with. One screw machine, in my hands, running one medical part, could make me a few million a year. All i have to do is prepare my self. One screw machine, one temperature controlled room, one part, and I will make more money then most job shops dream off. I dont think I will have to wait a long time to retire if I start making that type of money.

Until that day I will work as hard as I can, learn as much as I can, take on any machining challenge, just for my experiences sake.” The barracks at Majdanek.

Thirteen years ago I visited Hell for two hours and then boarded a bus to a local hotel.

My wife Risa and her friend Judy were taking a winter holiday in Poland, immersing themselves in the Jewish history and culture of our Eastern European ancestors. To fully understand their life it was crucial to see how it virtually ended in the Nazi gas chambers of World War II. Poland, to its credit, has maintained its Concentration Camps as permanent shrines to its appalling past.

I had chosen not to do the trip, but I was doing some business in Europe at the time and joined them to take the chartered bus from Krakow to Lublin where the Majdanek Concentration Camp was located.

This memory reopened for me Monday when Bob Ducanis of Orlando, an old friend and client, sent me a book he had just read, Ordinary Men by Christopher Browning, about the local guys in Poland who became willing, even eager participants, in the Nazis’ “Final Solution.” Reading the 1992 paperback brought back my memory of Majdanek, which I would like to share.

Our bus ride to Lublin was slow because of a continuing snow. Not much talk because I think everybody on the bus was thinking about relatives who made this trip to death in sealed railroad freight cars. We finally arrived at Majdanek. To my amazement it was a few hundred yards from a residential neighborhood in the old city of Lublin, once a hub of Jewish life in Poland.

We disembarked from the bus to enter the main building of the Camp. The weather was cold, with light flurries, but not harsh. Everybody walked toward the entrance but me. I tried to take in the moment, but I was struck by the sheer ordinariness of the buildings and the closeness of the town. This factory for killing looked from the outside like a rundown manufacturing plant on the Southside of Chicago. An impulse hit me to pull off my heavy parka – and then my sweater, shirt – and finally, undershirt. I wanted to really feel the cold on my naked chest. I felt the snowflakes melt on my body, rubbed some snow on my hands, and tried to connect with the horror people must have felt 60 years earlier. It was a weak gesture of connection. I put my clothes back on and walked silently back into the “welcoming” area.

There was a registry of the people who had the horrible misfortune of being sent to this Death Camp. There were notes next to the names, like “Jewish” or “Gypsy”. I had forgotten that the Nazis regarded Jews and Gypsies and homosexuals all as vermin to be eradicated by their efficient extermination processes. I touched the straw barracks beds that the victims used for a very short period before they were killed.

Then I moved on to the shower room. That was where the true horror of the place hit me. I saw where the gas came through the vents to quietly kill the naked showerers. I took in deep breaths – and didn’t die – and then I walked out shaking. I couldn’t deal with any more. I left and sat down next to the bus. I relived the showers and looked at the ordinary neighborhood so close by. “They had to know what was happening in their midst,” I kept thinking.

Finally, my fellow Concentration Camp tourists came out of the building and we headed for our local hotel – in dead silence.