On today’s podcast we’re talking about bar loaders for multi-spindle screw machines. Our guest is Chris Manning. Chris has been installing and repairing integrated bar loaders around the world for 20 years, primarily Cucchi bar loaders. Integrated loaders, usually those made by Cucchi or IEMCA, replace the traditional stock reels on multi-spindles.

Bar loaders may sound like a boring topic, but they are actually quite expensive and complex equipment. One integrated loader can enable a single machinist to run three machines at a time.

(3:10-8:05) Chris talks about his career path. He started as a chipper at a machine shop in Ohio in the ‘80s. Eventually he graduated to running and setting up cam multi-spindles. In the late ’90s he went to work at Gosiger, a machine tool distributor in Dayton, Ohio, where he sold Euroturn multi-spindles and Cucchi bar loaders. Later, he worked with Luca Lanzetta who took over distributing Cucchi. Since then he has worked for various other machine tool firms and started his own company Bar Loader Services. 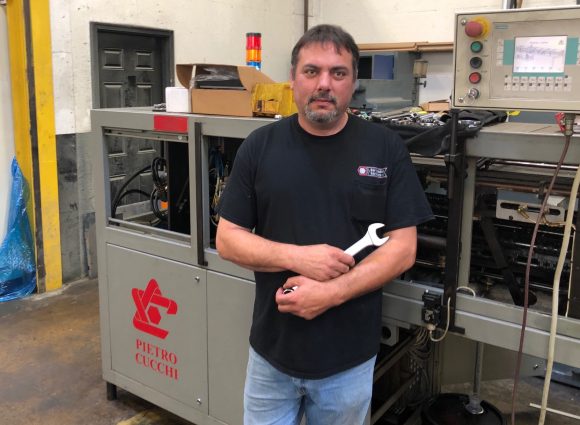 (11:42-13:50) Chris discusses the mechanical process of integrated bar loaders. He says that if they are properly implemented in a shop, a Cucchi or IEMCA bar loader can enable one person to run three multi-spindles at a time.

(15:20) Chris explains the differences between Cucchi loaders and IEMCA loaders. He says the fingers on Cucchi loaders enable it to absorb vibration well and that they are far superior at running hex stock. He says he prefers IEMCA loaders for running very small diameters, 1/8” or smaller.

(20:10-21:30) Chris talks about the main technical problems he encounters in the field when bar loaders are poorly maintained.

(21:30-22:25) Chris speaks highly about the new MBL bar loaders produced by INDEX. He says they seem like a cross breed between IEMCA and Cucchi, taking the best characteristics of each.

(22:34) Chris says he is seeing more and more shops in the United States replacing multi-spindles with single spindle CNCs and CNC turning centers.

2 thoughts on “Swarfcast Ep. 53 – Chris Manning on the Beauty of Bar Loaders”