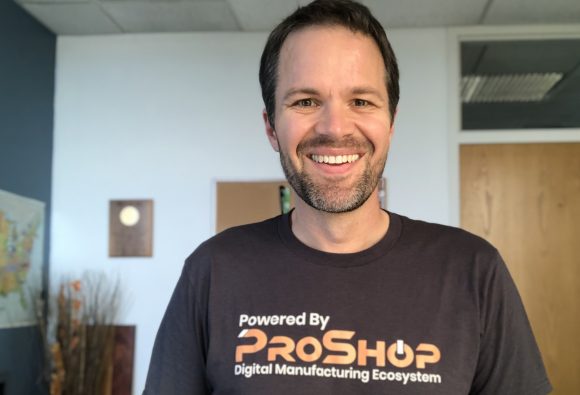 On today’s show we’re talking about how to set up machine tools efficiently.

Paul shares his background. He grew up in New York and studied mechanical engineering in college. He says he found it dry, so he began looking for something more hands on. He found a program in Washington State that was heavily involved in the Formula SAE competition, which he fell in love with. He and his teammates decided to start a machine shop together right out of college. (3:10)

Paul says that for their machine shop’s first three years (in late 1990s) the company used Excel to make its job routers and travelers. As it added more machines, it put a computer next to each one. (5:15)

Paul explains that the idea for his company’s proprietary shop management system came out of desperation and need. As the company grew, introducing more machines and employees, Excel was not keeping up. His team researched shop management software in the old school Thomas Register books. (6:25)

Paul says that none of ERP software firms his company looked at offered products designed specifically for managing the shop floor. The products also required paper printouts, which Paul and his team felt was a step backward from what they were already doing using Excel. Ultimately, they decided to hire a software designer to design a custom ERP system for the company. Paul says it took a little less than a year to develop workable software to handle the company’s needs. (7:35)

Paul says it took about eight years before the company’s ERP software received outside attention. During the economic slowdown in 2008, a production manager from his company’s biggest customer came to the shop to work one day a week. When he tried using the ProShop ERP he liked it so much that he told his own company about it. (10:50)

The customer convinced Paul’s company to let it use ProShop ERP. Paul says that within six months of using the system his customer’s productivity was boosted so much it was able to free up three full time employees, and it drastically decreased its lead-times on various jobs. Then the customer asked if Paul’s company would allow some of its vendors to use ProShop ERP. Paul and his team then realized the opportunity to start a new business selling their ERP, which they founded in 2016. (12:30)

Paul says he misses the joy of the production process of running a machine shop, but he says providing ProShop to help other companies succeed is what he enjoys the most. (15:45)

Paul says proper setup process starts when a machine has already been torn down from its previous setup. The teardown should be part of the machine’s previous job’s processes. (18:46)

Paul says the first thing to think about when starting a machine setup is to have all of the materials ready for the job at the machine—tooling, instructions, and rich media such as videos and photos to guide the setup person. This is because if a setup person has to leave the machine to get something that she forgot she can run into a multitude of distractions in the shop which significantly delay getting back to work on a machine.

Paul says one of the worst obstacles in slowing down setup time is when the shop doesn’t even have a necessary tools or materials on site. Then the setup process loses days while the company waits for materials to be shipped in. (23:00)

Paul says it’s very important for a setup person to have detailed work instructions for a job ready (SEE VIDEO BELOW). He says that ProShop ERP’s paperless system makes it easy for people to have all the important info about a job at the machine at all times (again, so they don’t have to get up and leave the machine). Having paperless instructions also makes it smooth to set up jobs that were already run on that machine in the past because the setup person doesn’t have to find an old printout. The instructions from the old job are ready on a computer next to the machine and may have important updates from the last time the job was run. Having organized instructions at a machine that are easily accessible enables a different person to set up a machine than the previous one. Paul says that ProShop ERP has plans to have software integrated right on machine tools in the future.(24:45)

Paul says another important part of every setup is continuous improvement on a part. One of the key features of ProShop ERP is that it allows machinists to document process improving ideas, flag their planning department, create action items, and assign tasks to save even more time. It’s all in one place so that communication is simplified and efficient. (31:40)

Paul says one of the most interesting things he learned last week was that 6% of the forests on the West Coast have burned this year within the last few weeks, which is nearly 20 times more acreage than last year. (34:05)

Paul says a key takeaway is that setup is very logical and doesn’t require specialized software if you have key systems in place. He believes that a little upfront work will have huge ROI on your time on the back end of the process. (35:15)

Question: What aspect of work do you wish you were more organized for?