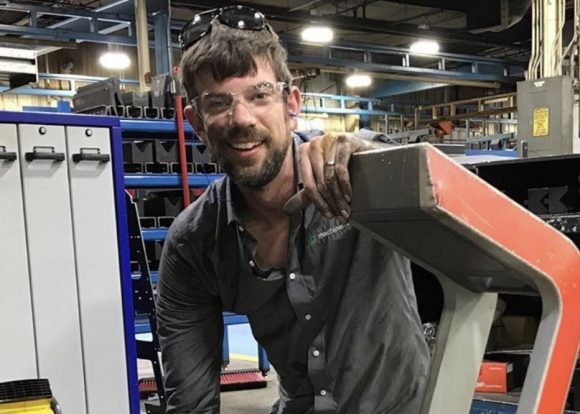 Today, we’re going to do a quick Throwback Thursday to March of this year, to a discussion about going digital with machine data.

This week’s podcast is an interview we did with Eric Fogg, co-founder and head of machine connectivity at MachineMetrics. MachineMetrics produces an IOT device that connects directly with machine tool PLCs and controls to track realtime and historical data on equipment. Operators use the data to assess how machines are truly performing, which is often quite different from what they perceive.

Eric explains that MachineMetrics is a machine data connectivity data platform. The company makes a device (he calls an “edge device”) that connects directly to machine controls and sensors of production equipment. The device gathers valuable data on how the machines are performing and sends it to operators to analyze. (3:10)

Eric talks about taking machine shop classes in high school. During high school he worked at a lot of different machine shops on nights and weekends and taught himself programming. (4:10)

Eric says that MachineMetrics can gather data from all vintages of machine tools, not just CNC machines, though CNC machines provide the most data. He says right now MachineMetrics has a client using its edge device to gather data from a punch press that was manufactured in 1925. He says, “As long as it moves and has electrons flowing through it we can probably get some useful data out of it.”(7:00)

Eric says that in college he majored in theology because he wanted to work in the field of corporate ethics. Eventually he started his own machine shop in his mid 20s that specialized in green technology products. (10:00)

Eric says that when the 2008 recession hit he started doing more job shop type work with low margins. He eventually closed his company started doing Six Sigma consulting for job shops in Vermont. The experience of analyzing the processes of different shops inspired the idea for MachineMetrics. He says he observed that shops were often making decisions based on a gut feeling rather than based on data. He came up with the idea to pull the data that already was on the machines’ controls to create reports, dashboards and analytics to help machining companies make decisions. (14:00)

Eric says the most basic data MachineMetrics tracks is machine utilization—how much machines are running versus how much people think they are running. He says the average perceived utilization of equipment by MachineMetrics’ customers is just under 80%. The actual average is in the high 20 percents to low 30 percents (the numbers are based on active shifts). He says that the numbers can be surprising as various markets differ. For instance, he says for some types of very low volume work (1 or 2 part runs) 15% utilization might be considered world class. He says for high volume shops utilization is often much higher. For instance, he says shops making millions of parts with much thinner margins sometimes have utilization in the 90 percents. He says that no matter what type of shop, clients are usually surprised at their utilization rates. (20:25)

Eric gives some examples of how MachineMetrics data uncovered problems that led to low machine utilization. He gives an example of a client who was using cheap 1/4” drill bits on a drill and tapping center. The company calculated it took only 5 minutes to change a drill bit out, so they used cheaper ones with short tool life. The problem was that while operators left to get a new drill bit from the tool crib they got sidetracked and the average time to change the drill bit was actually over 40 minutes. After learning this the owner of the company decided to go out and buy the most expensive drill bit that lasted 10 times longer than those he was using. It was a solution that was much faster and easier to implement then changing the procedure in the shop which could have tons of variables to consider. (24:10)

Eric says that MachineMetrics generally does not advise customers how to use the data they collect. He has found that customers usually take the initiative to solve their problems. He says his company is often surprised at the interesting ways that clients utilize the data. (27:40)

Eric discusses a phenomenon he sees in CNC shops he calls “cyclecreep.” What happens is that over time people gradually alter they way they run jobs by making tweaks such as changing tools or feed rates which often increases cycle time. The problem is that the manufacturer continues to bill its customer for the original cycle time. Operators see green lights on machines which makes them think everything is running fine but problems are occurring behind the scenes. (30:15)

Eric gives an example of a company running the same parts on 20 vertical machining centers that were bought over 10 years. MachineMetrics found that no two machines had the same original cycle time of 40 minutes. He says that some cycle times only differed a few seconds but the delta between fastest machine and the slowest machine was 15 minutes. After seeing this data, in just a week the company was able to adjust the machines to all have a cycle time within a few seconds of each other. (35:30)

Eric says it can be difficult for his clients because often MachineMetrics is delivering them bad news. He says that the consistent trend he sees is that the most successful shops have a culture around change. (37:25)

Question: Are the effects of the coronavirus a net plus or a net minus for your machining business?

Manufacturing a $70,000 Wristwatch in the United States, with Josh Shapiro EP-174