Innovation from Playing with Machines, with Mike Taylor 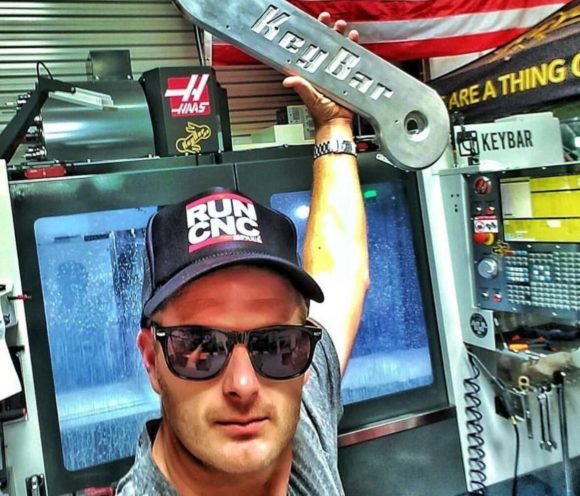 Two weeks ago, Mike Taylor inquired on a Tornos GT26 Swiss lathe Graff-Pinkert had for sale. He told me that for him the machine would be like buying a new motorcycle. If he bought it, he would spend months learning how to use it himself before expecting to make any money with it, and it would be a lot of fun.

If Mike buys the machine it will be used to make screws that go into a KeyBar, the product he has been selling since 2013. A KeyBar is an organizer for keys and other tools that fold out in a style similar to that of a Swiss Army knife. Some of the tools available include a screw driver, blade, bottle opener, or even a comb. They’re often made of titanium, featuring distinct textures and colorful designs.

Before he started KeyBar, Mike had been a chief engineer for several hotels in Georgia. He had a decent sized staff working under him and had to carry around a lot of keys that constantly jangled wherever he walked. The loud keys tipped off his slacking staff as he approached, so he always found them working diligently. His noisy key problem had be solved.

Mike is a knife guy. He won a pumpkin carving contest by carving a pumpkin under water. He was awarded a prize of $6,000 worth of knives and a trip to BLADE Show, the largest knife show in the world. At the show he was exposed to new machines, processes, materials and tools. When he got home he was inspired to create the first KeyBar—a stealth weapon to solve the problem of his slacking staff.

Mike started making KeyBars by hand for friends, but eventually they became so popular he started a business selling them. For several years, all of his components were outsourced, but gradually he brought the production process in-house, purchasing equipment such as a laser engraver, waterjet, and Haas VF4.

Throughout our interview, Mike kept telling me how much he was constantly learning and how learning fueled his business. That day alone, he had experimented with machining carbon fiber composites and learned to use a new printer for making labels.

Mike has a small but excellent staff at his company, who he trusts to handle most of the production and busy work. This frees him up to learn about new processes and play with the shop’s equipment. Often he enjoys making things other than KeyBars. He showed me a skateboard he fabricated out of a 3/8” thick titanium billet plate. The skateboard has a honeycombed design made with a waterjet. It features knurled and milled textures. It’s laser engraved, flame anodized and electro anodized. Mike plans to bring it trade shows to start conversations with skateboarding enthusiasts. He said producing the skateboard pushed the limits of the machine tools in his shop, which gave him important insight into their strengths and limitations.

In my first conversation with Mike I asked him if a letter opener tool was available in a KeyBar—there wasn’t one. He told me that after our conversation he was going create one that day. One week later, on the day of our interview, the KeyBar website was offering a 100% titanium letter opener dubbed “The Noah.” It has a fleur de lis thumb tab and is available in Polished Titanium, Anodized Bronze and Radiant Teal.

I wonder what fun stuff he will make when he finally gets to take a new Swiss machine for a spin.

Question: What would you make if you had free time to play with the machines in your shop?